How To Decide When You Can’t Decide 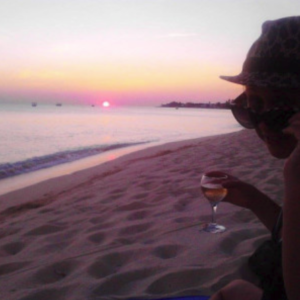 OK so I’m THE worst decision maker on the planet. I’m a hot mess, I don’t mind admitting it. At times, the stress of just choosing the right outfit has had me in fits of tears, and expensive tickets to events have been thrown in the trash. My usual behaviour when ordering at a restaurant or takeaway food has famously been dubbed the “Emma Buffet” at home because I can never decide what the hell I want and end up ordering two or three different things, only to eat almost none of it. And that was from way before I even had a doggy for all the doggy bags.

So how was someone like me supposed to make the biggest decision of her life? To me, anyway, the question of choosing whether to procreate was just an enormity. For other people around me though, babies seemed to just fall out of them, without even stopping to think about it. Sure, some of them definitely make a conscious choice to create and nurture human life, but others I suppose just did what was expected of them at a certain age. Was I over-analyzing this? My own mother said to me “Don’t you think perhaps you’re thinking about this too much??!” But this is not just human life, it’s having your present lifestyle, and everything about your future, changed completely and utterly. Forever. Not to mention the financial aspect (we don’t have any money), the fact that I have enough trouble getting my own little self around in the world and staying out of trouble and / or the Accident and Emergency room, or the fact that I’d sure as hell end up over-analysing the entirity of parenthood, and my kid would thusly end up even more than a neurotic weirdo than I am.

So yeah, it was a tough nut to crack, this whole baby thing. It’s taken me almost five years to actually make up my mind for sure, and even now on some days when I’m feeling soft or hormonal, I’m still not 100% sure. Why’s that, you ask – you’re clearly an incapable idiot, what’s there to debate? Well, because – plot twist ahead – I love kids! OK not all of them, maybe 60 / 40. I work with kids and generally find it easier to communicate and get along with little people than with grownups. Proper grownups, ie unlike me and the husband (you know, proper adults, with suits in their closets who are all practical and go to the theatre and stuff) are pretty boring. Kids are not. I have a 4 year old kid who I could actually spend all day with and would 100% enjoy his company with for the entire time, and spend most of it giggling. And a 6 year old who inspires me more than most adults ever have. She’s badass.

Also, my husband would be a great dad. I’ve seen him with the kids of his friends and it has totally melted my heart. But then again, if we had kids, he would probably have to give up his beloved career in scuba diving – and I could never live with myself for taking that away from him. He’s spent years working up the ranks almost to the very top, and now gets to enjoy diving in the Caribbean sea every day and playing with all kinds of toys like big boats and underwater scooters. But diving doesn’t pay enough to raise a family, and the island where we find ourselves currently mooning about in is disgustingly expensive in terms of living costs, school fees, medical expenses etc. It would probably mean going home to rainy old England, and he would have to go back into a sales job. Right now we get to play on the beach with our dog at weekends and splash around in the sea, sometimes nipping across the water for a week in Cuba or Texas. It’s pretty great.

I had no idea how to tackle this dilemma or find a solution to this impossible quandry. I mean, could you? The call to motherhood was not strong enough for me to be certain that I should give all this up in order to put more babies on the planet (don’t even get me started on population and the planet). But I was terrified of regretting my decision in the future. At times it was making me sick with the inner conflict – and I was soon approaching 35. I decided to write a book about my decision-making process. It helped. It not only helped me in a cathartic way, but in many other ways too. I found out that I really like writing, I started a blog, I met some new people, I found the blogs of other people who had been through the same process. I began to slowly become more sure of myself. I started noticing mothers in the supermarket making questionable parenting choices – putting myself in their position and realising that I’d probably screw it up too. Probably moreso. Then one day we found ourselves lying on the beach on a lazy Sunday, watching our dog frolic around and trying to dig up crabs, nothing but the sound of the waves over his ocassional squeaks of crabby joy. And then I knew for sure – we both knew for sure. This kind of freedom, never mind the peace and quiet, is priceless. And it suits us both down to the soft sandy ground.

1 thought on “How To Decide When You Can’t Decide”

Reviews of Childfree by Choice: The Movement Redefining Family and Creating a New Age of Independence are rolling in, and we’re pleased as punch to see that folks are enjoying the book! Freelance reviewer Terri Schlichenmeyer (AKA The Bookworm Sez) wrote a…
END_OF_DOCUMENT_TOKEN_TO_BE_REPLACED

This is our manifesto; what we’re {not} having a baby! is all about. We hope you like it! If you do, get your own copy here! Special thanks to [Expert Enough] for inspiring our manifesto. Imitation being the sincerest form…
END_OF_DOCUMENT_TOKEN_TO_BE_REPLACED

As a 40-something year old woman, I’ve been around for enough years to have enjoyed my share of friendships. Some were short-lived but intense, like the sort made at summer camp when you find your soulmate during orientation and then…
END_OF_DOCUMENT_TOKEN_TO_BE_REPLACED

by Emma Clarkson So, how was your 2017? Absolutely nuts, you say? Madder than a bag of spiders, you say? The worst time of your entire life … but hey, 2018 is gonna be your year – you can just…
END_OF_DOCUMENT_TOKEN_TO_BE_REPLACED