Lance’s Rants: the collected wisdom of Lance…one of the few vocal childfree men, screaming my rage from the wilderness. I tear a righteous childfree-hole in this pronatalist world’s collective arse!

Welcome to the {Childfree} Thunder Dome!

Ok, that’s a bit grandiose, but on this page I do try to blow off a little steam while taking the pronatalist majority to task. Hopefully I’ll make you laugh a little, think a little, and most importantly, waste your employer’s money while you read this stuff at work.

I just ordered a new pair of running shoes for the first time in about 4 years. Exciting news, right? Not really, but it did get me thinking about why its been so long. You see, when Amy and I moved to Maine from Minneapolis we were both pretty avid runners. I’ve run a couple of marathons and Amy has run four. We’ve both done a lot of other races ranging from 5k up to half marathons.

Putting aside the ridiculously cold winters, Minneapolis is a great city for runners. Spread across the whole city are numerous pedestrian trails. Right south of downtown there is a collection of lakes, surrounded and linked by trails that provides nearly infinite, convenient routes for runs from a couple of miles to double digit lengths. Water fountains are staggered along most of the trails along with the even more important bathrooms.

We have our first guest post on Lance’s Rants! Yep, today Amy steps up to the mic to drop her two cents on the musings of  Susan Patton.

In a fit of fear mongering that would surely make doomsday demographer Jonathan Last proud, “Princeton Mom” Susan Patton implores 20-somethings to giddy-up and get on the baby making train ASAP before their lady parts shrivel up and die at the ripe old age of 30ish. In fact, if you’re a recent college grad, you’re an old lady by Patton’s standards for “half of your childbearing years are behind you.” So get on it girls, and make some babies!

To the People Who Seem Unable to Behave Like Adults

Maybe bringing your infant to a ski resort isn’t the best idea. I’m guessing that you know your baby. Is it a wailer? A screamer? Then you know this is a bad idea. Is your baby the quietest baby ever in the history of the world? Then this is still a bad idea. Murphy’s law says that this will be the occasion on which your baby becomes a screamer.

There are other options. Rent a house where you don’t have neighbors sharing a wall. From what I hear you’re a high-powered brain surgeon…you’ve got the cash. Or go to Disney or leave your baby with Nanna and Pappa. Or maybe stay home and take care of your kid. You did choose to have this baby, right? You knew there would be some sacrifices, right? Or did you think those sacrifices should be born by the people in the next room at Vail.

I have to admit… being childfree has been fairly easy for me. First and foremost the woman I’ve been married to for  19 years, Amy, has known for many years that she doesn’t want kids. Effortlessly being on the same page with my partner has made my choice to be childfree less painful. Additionally, neither my family nor Amy’s has really given us any grief or significant pressure. I haven’t been completely immune though. There have been the occasional offhand comments and questions from family, friends, colleagues, acquaintances, and of course, complete strangers.

The most memorable questions for me have always been some variant of “When are you going to have kids?” The question really never bothered me much – it’s more memorable because of the effect my answer had on the asker. My response varied over time starting with the early “We’re probably not…” evolving to a more solid “Never!” as I became convinced Amy wasn’t going to change her mind about not having kids. In all cases my answer was accompanied by a huge grin. This usually appeared to fluster my questioner…Not having children? And so happy about it? Whuh?

A barn raising is an event in which members of a farming community band together to, ahem, raise a barn.

Technically it could be to repair an existing barn as well, so there you go. It’s not all in the name.

Anywho, the point is that the community gets together to help each other accomplish a task that an individual or single family would be hard pressed to accomplish on their own. Now it’s important to note that in this context, building a barn is not a whim or desire. For farmers, the barn is a critical piece of infrastructure and without it they will fail.

This is a perfect situation for a reciprocal help arrangement to arise. Specifically IF we’re all farmers AND we all need barns AND we can’t build a barn on our own THEN we help each other build barns.

Let me clearly state that I am not formally trained in debate. I am trained in biology and the scientific method so I feel I have some handle on the notions and use of logic. Prior to reading Jeub’s post I believed that debaters attempted to incorporate factual information in support of their proposition; that arguments should avoid the use of fallacies.

Of course, this assumes some level of intellectual honesty on the part of the debater. But this is clearly not the case. As Wikipedia states “Though logical consistency, factual accuracy and some degree of emotional appeal to the audience are important elements of the art of persuasion, in debating, one side often prevails over the other side by presenting a superior ‘context’ and/or framework of the issue, which is far more subtle and strategic” (emphasis added).

Getting Parents on Board the Childfree Bus

So, a few days ago Amy posted a link to a news article on our Facebook page. The article summarizes research findings on the relative happiness of parents vs. the childless. The study in question had some interesting findings:

For some reason, this Facebook post really attracted attention from parents, something we haven’t gotten a lot of to date, but which we invite. After all, one of our goals is to make being childfree a generally acceptable choice. That means engaging meaningfully with parents.

dooce.com Drops a Deuce on the Childfree

A couple of days ago the Google delivered a blog post to me from dooce.com with the intriguing title Wait until this gets picked up in a childfree by choice forum.

Of course I had to read it.

The post is about the author’s experience on a recent flight. Some people on the plane were asked to shuffle seats and, in the resulting melee, one of the passengers took issue with being re-seated next to a woman holding an infant.

My experience has been this – when the average person hears that I am childfree and that I don’t want, and never wanted, kids the next {il}logical step they take is to assume that I must hate children.

Now, clearly just because a person does not want x, it does not logically follow that the person must hate x.

Did you hear Spock rolling over in his future grave?

Anyway, what I’m here to do is correct this misapprehension about me and to save all you assumers from turning into asses…you’re welcome.

Childfree – Who Gets the Label?

Since Amy and I started blogging about childfree life I’ve spent a loooooot of time in various childfree groups on Facebook and other places. I’ve seen a lot of kindness and support extended to people who are dealing with the downsides of childfree life like disapproving family, friends, and complete strangers, condescension, accusations of selfishness, etc. This is great and it’s what we should be doing for each other.

I’ve also seen a lot of cruelty and hate. Derogatory terms for parents and children and sometimes even for people that are sitting on the fence. This is not great. Now, don’t get me wrong. I do understand the need to vent. Believe me! But what I see on occasion goes way beyond that.

The Not So Miraculous Miracle of Birth 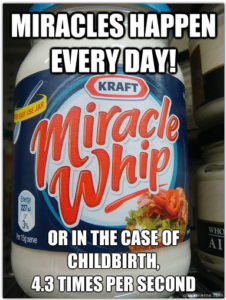 So, one pervasive feature of our child-worshiping culture is this notion of “The Miracle of Birth” which quickly transitions into children themselves being miracles. I’m kind of a stickler for defining terms and then not letting people redefine them for their own purposes. Ask Amy how asshole-ish I can be about this.

As I was saying, more or less, words are pretty much useless if everyone gets to define them however they want. So let’s see how an authority on words – in this case Merriam-Webster – defines our term of the day:

Offending the Childless in 140 Characters or Less

I have to be honest – I don’t get Twitter. And not in a Andy Rooney curmudeonly, luddite “I don’t like anything new” sort of way. I’m a relatively tech-savvy guy. I’ve written code and managed enterprise software products. I’ve torn apart and built PCs. I’m an Android guy; Apple…bleh. I spend too much time on Facebook. I love Google Apps and Drive. I order everything online.

With all that, I still don’t get Twitter. And it’s getting me into trouble, but more on that later. First, let’s discuss what Twitter is like to me. 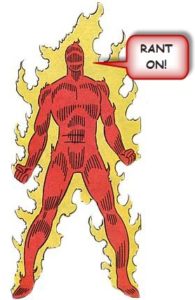 So, I was going through our daily deluge of childfree Google Alerts when I stumbled on a little editorial on a site called codyenterprise.com. It’s written by Darian Dudrick who is listed as the managing editor. For those who care, this is a newspaper, apparently founded by W.F. Buffalo Bill Cody and Col. John Peake in August 1899 which is kind of cool.

The editorial in question was a response to the Time childfree article…of course. There’s really nothing special about the editorial; what drew me in was that it is soooooo representative of that portion of the population that chooses to view the childfree dubiously.

So, I decided to eviscerate the relevant points in a rant. Let me put some music on, refill the coffee, and we’ll be off. 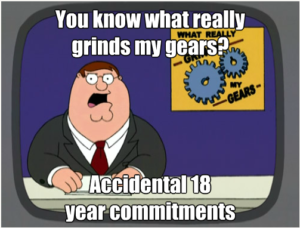 Since I’ve become more involved in the childfree – dare I say? – movement, one thing is glaringly clear to me; There are a lot more women invested in this thing than men. Like way more. Like really, really, way, way more. I have a few theories on this…which you can read here.

Anywho, in this particular case the movie clip and specifically the phrase “Soooo…it’s going to be just you two?” perfectly captures the confusion of many people when told we’re {not} having a baby.

So, earlier this year, I got an awesome opportunity consulting for a company based in Greece. As part of the gig, they flew me to their headquarters in Athens to work with their staff for a week. This did not suck.

Hello brave reader and welcome to Lance’s Rants. My goal with these entries is to be a male voice in the childfree discussion; a view that seems underrepresented to me.

My ultimate goal is to draw more men into the discussion. Hopefully those of you out there in childfree relationships with men will encourage them to become involved and to be heard.

Skip back to main navigation