dooce.com Drops a Deuce on the Childfree

A couple of days ago the Google delivered a blog post to me from dooce.com with the intriguing title Wait until this gets picked up in a childfree by choice forum.

Of course I had to read it. 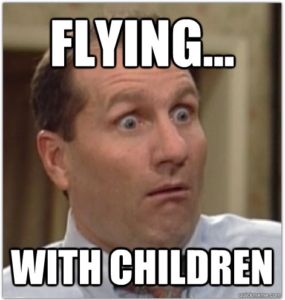 The post is about the author’s experience on a recent flight. Some people on the plane were asked to shuffle seats and, in the resulting melee, one of the passengers took issue with being re-seated next to a woman holding an infant. According to dooce the resulting exchange between the passenger and a flight attendant went like this:

“I need my stuff!” he yelled. “And I most certainly won’t sit next to a BABY.” He yelled this with his arm extended, his finger pointing at the child. Every person who was on board the plane could hear him.

The flight attendant tried to calm him down. “Well, you see—”

“I will NOT sit next to a BABY on an AIRPLANE,” he interrupted, his voice booming through the whole cabin.

Now, assuming this all went down as described, I’ll agree with no reservations that this is asshole-ish behavior. Even if you hate kids and have had a horrible day, you shouldn’t treat people like that. There’s likely a better way to handle the situation. What I do take issue with is the title of the article and the assumptions it makes.

Facts Not in Evidence

One can only draw the conclusion that the author assumes the belligerent man is childfree. That’s really the only way the title makes sense. However, if you read the post you’ll notice that there is no evidence – none at all – presented that would lead you to this conclusion. I’m guessing here, but if the man was wearing a badge that said “I’m Childfree and a Kid Hater” or one of these awesome t-shirts she probably would have included that information in the post. She didn’t.

So, she is inferring his childfree-ness from his behavior. In this case angrily asserting a preference for not being seated next to a potentially screaming, pooping, peeing, and/or vomiting baby while trapped in a tin can at 50,000 feet for several hours. This apparently is something that only a childfree person is capable of.

“Wait until this gets picked up in a childfree by choice forum”?

Here’s the deal – this post is a non-story without the title. If the author didn’t drag the word “childfree” into the piece it would just be a story about an asshole on a plane… an asshole that is likely to have kids of his own. After all, the childfree are only about 10% of the population. And let me tell you, as a person that flies on average about 60,000 miles a year and has done so every year for the last decade – stories about assholes on planes are a dime a dozen; they’re about as fresh as a joke about airline food

…what is the deal with airline food anyway?  <Rim Shot!>

Reviews of Childfree by Choice: The Movement Redefining Family and Creating a New Age of Independence are rolling in, and we’re pleased as punch to see that folks are enjoying the book! Freelance reviewer Terri Schlichenmeyer (AKA The Bookworm Sez) wrote a…
END_OF_DOCUMENT_TOKEN_TO_BE_REPLACED

This is our manifesto; what we’re {not} having a baby! is all about. We hope you like it! If you do, get your own copy here! Special thanks to [Expert Enough] for inspiring our manifesto. Imitation being the sincerest form…
END_OF_DOCUMENT_TOKEN_TO_BE_REPLACED

As a 40-something year old woman, I’ve been around for enough years to have enjoyed my share of friendships. Some were short-lived but intense, like the sort made at summer camp when you find your soulmate during orientation and then…
END_OF_DOCUMENT_TOKEN_TO_BE_REPLACED

by Emma Clarkson So, how was your 2017? Absolutely nuts, you say? Madder than a bag of spiders, you say? The worst time of your entire life … but hey, 2018 is gonna be your year – you can just…
END_OF_DOCUMENT_TOKEN_TO_BE_REPLACED