Getting Parents on Board the Childfree Bus

So, a few days ago Amy posted a link to a news article on our Facebook page. The article summarizes research findings on the relative happiness of parents vs. the childless. The study in question had some interesting findings:

For some reason, this Facebook post really attracted attention from parents, something we haven’t gotten a lot of to date, but which we invite. After all, one of our goals is to make being childfree a generally acceptable choice. That means engaging meaningfully with parents.

Speaking of, while reading and responding to comments on the post, one thing became clear to me. The childfree and parents were often talking past each other. In my experience that means we’re each starting from a different set of assumptions. I did try to discuss this in a couple of comments but admittedly a Facebook comment thread is not all that conducive to getting across more complex ideas. So, I’m taking another stab at it here by trying to address two assumptions that I think are behind the confusion. 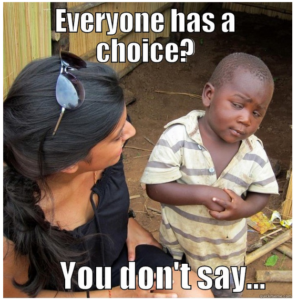 Everyone has a choice…to be a parent or not to…

Why can’t we just let people that want to have children have them and those that don’t want them, leave them alone. I think people can be happy either way and you are welcome to choose for yourself.

The previous quotes are comments from parents on our Facebook page. They indicate to me an assumption by these parents that the choices to have children or not to have children are equal, so there really is no issue here. I have two reactions to this.

First, to those parents who feel that the decision not to have children is not an issue, I want to give you a heartfelt thank you. Second, I want to point out that not everyone is like you.

Actually, most people and organizations aren’t like you. In fact our society is overwhelmingly pronatalist. The notion that having children is an unadulterated good and therefore everyone should have them or at the very least, everyone should want to have them, is widely accepted and enshrined. From families to religion to movies and TV to governmental policy to the workplace, society promotes and supports childbearing. Further, the pronatalist position does not allow for any criticism. As a result the childless are to be pitied as their lives must be empty or at least less than they could be. The childfree are actively suspect for making such a decision – What is wrong with them? – and subject to judgment.

In today’s world choosing to have children or choosing childfree are not equivalent choices.

Why Should You Care What Other People Think?

You guys analyze other people’s feelings too much. What matters are your feelings.

You don’t have to explain your decision to anyone. Just smile when they ask when you are having a family and say, I have one thank you. Too stressful to have to defend personal decisions that are no one’s business.

The parents quoted above do allow for the fact that people judge the childfree for their decision. The assumption here though is that it’s just not a big issue and that the problem is solved simply by not caring what those people think about you.

How ‘not caring’ should manifest is unclear. In the quote above, tactfully sidestepping (inappropriate) questions is an option and I can get behind that in a limited number of scenarios. I’ll assume that ignoring people is also an option. If “What matters are your feelings” is true – and by extension, other people’s feelings don’t matter – then I suppose telling people to shove their questions and opinions forcefully up a bodily orifice is also an option. However, whatever form “not caring” actually takes, I have at least two problems with this suggestion.

First, this assumption tacitly allows for people to treat the childfree differently. If you’re a parent, imagine for a minute the following scenario…

While waiting for a flight at the airport, the stranger sitting next to you starts up a conversation and asks where you’re headed. You respond that you’re headed home and that you really hope the flight is on time as you need to be back in time for little Johnny’s recital.

Suddenly the stranger’s lips curls, and with a look of disgust and confusion, says “You have a kid? What were you thinking? You’ll pour love, time, energy, and money into him and in the end your kid will probably just put you in a nursing home and wait for you to die so he can inherit whatever money you have left.”

Leaving you stunned, the stranger walks away saying “You’re going to regret it” .

Parents please re-read the above scenario.

Really, think about it. Consider how this would make you feel.

If this scenario actually happened to a parent, I theorize that most parents would not give the advice quoted above. I believe there would be outrage and the advice would be more in the vein of “You shouldn’t have to take that kind of sh!t from anyone!”

To be crystal clear, the above scenario is only imaginary in so far as it is happening to parent. It’s very real for the childfree – we get this treatment all the time, from strangers, from colleagues, from friends and family. People use words like selfish and self-absorbed. This should not be ok but that it is acceptable to treat the childfree this way illustrates, again, the difference between how our society treats the decision to parent and the decision not to parent.

These are clearly not minor consequences.

At the end of the day, most childfree people really want one simple thing – to have their childfree decision respected. If you’re a parent who wants to support childfree people in your life, or maybe more importantly, be supportive of those making the decision whether or not to become parents, there are some things you can do. The best place to start is to realize that the childfree do face bias for their choice and then not be part of it. Some simple examples include:

Reviews of Childfree by Choice: The Movement Redefining Family and Creating a New Age of Independence are rolling in, and we’re pleased as punch to see that folks are enjoying the book! Freelance reviewer Terri Schlichenmeyer (AKA The Bookworm Sez) wrote a…
END_OF_DOCUMENT_TOKEN_TO_BE_REPLACED

This is our manifesto; what we’re {not} having a baby! is all about. We hope you like it! If you do, get your own copy here! Special thanks to [Expert Enough] for inspiring our manifesto. Imitation being the sincerest form…
END_OF_DOCUMENT_TOKEN_TO_BE_REPLACED

As a 40-something year old woman, I’ve been around for enough years to have enjoyed my share of friendships. Some were short-lived but intense, like the sort made at summer camp when you find your soulmate during orientation and then…
END_OF_DOCUMENT_TOKEN_TO_BE_REPLACED

by Emma Clarkson So, how was your 2017? Absolutely nuts, you say? Madder than a bag of spiders, you say? The worst time of your entire life … but hey, 2018 is gonna be your year – you can just…
END_OF_DOCUMENT_TOKEN_TO_BE_REPLACED