Offending the Childless in 140 Characters or Less

I have to be honest – I don’t get Twitter. And not in a Andy Rooney curmudeonly, luddite “I don’t like anything new” sort of way. I’m a relatively tech-savvy guy. I’ve written code and managed enterprise software products. I’ve torn apart and built PCs. I’m an Android guy; Apple…bleh. I spend too much time on Facebook. I love Google Apps and Drive. I order everything online. 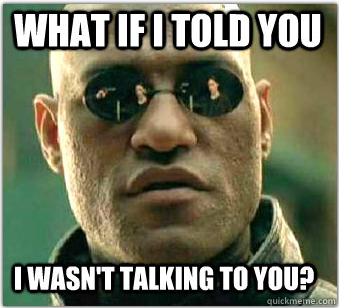 With all that, I still don’t get Twitter. And it’s getting me into trouble, but more on that later. First, let’s discuss what Twitter is like to me.

This is really weird to me. 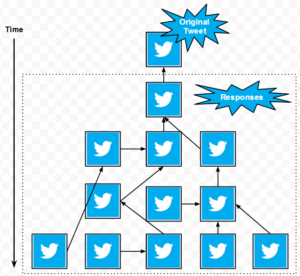 When you do manage to connect with someone, Twitter’s design takes over. By that I mean asynchronous, non-threaded discussions. I’m a visual guy…the pic here shows how I visualize a simple Twitter interaction…click on it to make it bigger.

Don’t worry too much if the pic doesn’t make a lot of sense. That’s kind of the point…it’s a mess. You Tweet something, then its a free-for-all. Anyone can respond to any Tweet in the thread at any time in the conversation. Without regard for anything that’s been said by anyone else. Oh, and also, pretty much anyone on Twitter has a chance of getting pulled into the conversation at any point.

<sarcasm>This really only matters if you think context is important.</sarcasm>

Bonus: IMHO even the simple threading for each linear conversation is horrible. This is a problem that has been solved in every chat/comment application ever written.

We can’t forget the 140 character limit. Its pretty difficult to formulate anything substantive within that limit, much less something substantive that has a reasonable chance of not offending one of the teeming masses that might be listening in. It’s great for forcing cleverness but not so useful when you want to really be clear.

So, how is Twitter getting me into trouble? Well, it started innocently enough with a post about Julia Child. She was childless, not childfree. What I gather is that she or her husband was infertile so they were unable to conceive. She was unhappy with this situation so we childfree can’t claim her. We can, however, appreciate her for her accomplishments as a woman without children. I would argue that, had she had children, it’s unlikely she’d still be a household name. But that’s another post.

Things went wrong when a Tweeter – is that a word? – who’s childless not by choice picked up the thread expanding it to her circle of like-minded people. I didn’t quite catch onto the switch in audience. I then proceeded to stick my foot in my mouth. I wrote a Tweet that was poorly worded, specifically:

Yeah. In hindsight, very insensitive to people who are experiencing real, not seeming, misery. I in no way intended to devalue, denigrate, or offend anyone who is experiencing a real desire to have children and who cannot. What I was trying to do, poorly, was state that a happy life without children is possible. I do firmly believe that many who desire children do so at least partially as a result of social pressure. One of our goals at w{n}hab! is to reduce that social pressure through education, research, and community. The childless not by choice are a welcome part of our community.

Ultimately, once I understood why offence was being taken, I apologized. If you’re one of the offended, again apologies. Hopefully this is/was good enough. However this really got me thinking about Twitter as medium for real, civil conversation and sharing of ideas. When you factor the real-time interchange, lack of coherent audience, lack of current context for any given discussion, and the limits on information that can be shared at any one time, I think it sucks.

Maybe this will change if I ever really get Twitter.

Reviews of Childfree by Choice: The Movement Redefining Family and Creating a New Age of Independence are rolling in, and we’re pleased as punch to see that folks are enjoying the book! Freelance reviewer Terri Schlichenmeyer (AKA The Bookworm Sez) wrote a…
END_OF_DOCUMENT_TOKEN_TO_BE_REPLACED

This is our manifesto; what we’re {not} having a baby! is all about. We hope you like it! If you do, get your own copy here! Special thanks to [Expert Enough] for inspiring our manifesto. Imitation being the sincerest form…
END_OF_DOCUMENT_TOKEN_TO_BE_REPLACED

As a 40-something year old woman, I’ve been around for enough years to have enjoyed my share of friendships. Some were short-lived but intense, like the sort made at summer camp when you find your soulmate during orientation and then…
END_OF_DOCUMENT_TOKEN_TO_BE_REPLACED

by Emma Clarkson So, how was your 2017? Absolutely nuts, you say? Madder than a bag of spiders, you say? The worst time of your entire life … but hey, 2018 is gonna be your year – you can just…
END_OF_DOCUMENT_TOKEN_TO_BE_REPLACED