We have our first guest post on Lance’s Rants! Yep, today Amy steps up to the mic to drop her two cents on the musings of  Susan Patton.

In a fit of fear mongering that would surely make doomsday demographer Jonathan Last proud, “Princeton Mom” Susan Patton implores 20-somethings to giddy-up and get on the baby making train ASAP before their lady parts shrivel up and die at the ripe old age of 30ish. In fact, if you’re a recent college grad, you’re an old lady by Patton’s standards for “half of your childbearing years are behind you.” So get on it girls, and make some babies! 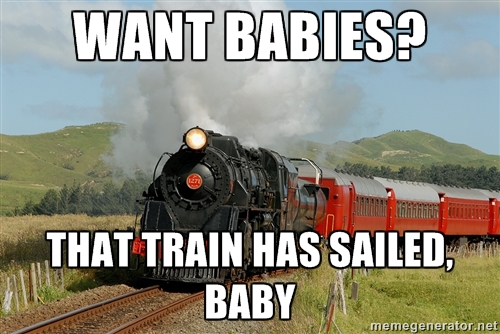 Patton makes her argument on the grounds that “you don’t get everything” and on this point, and probably only this point, Patton and I see eye to eye. But while this point may be very good, if obvious, the conclusion Patton draws from it is patently (Patton-tly?) off the mark. Why would we encourage anyone, even those who know they want kids, to have them before they’re ready?

If you decide you’re ready for kids only after you’ve passed the ripe old age of whatever-doctors-are-now-saying-is-too-late-to-get-pregnant, well then why not offer a home to one of the many, many children already out there and in need? Or, here’s a radical idea: If you’re really committed to kids’ well being, don’t even worry about whether or when to get pregnant. Instead, skip the whole procreation thing altogether and just go for adoption or fostering right away. Seriously, people. I can’t be the first person to have thought of this.

In a world where too many people already populate this earth and plenty of  people need loving homes, I’d say the better advice to those who know they want to rear a kid is to urge them be sure that’s what they want, prepare accordingly, and go for it only after they’re sure they’re ready.

Assuming Patton actually agrees that bringing a new life into this world is an inordinately ginormous responsibility, it seems she’d want to encourage potential mothers – and fathers – to be prepared for said responsibility and to really know that’s what they want. The consequences of having a kid you regret or are ill prepared to care for are far greater than the consequences of wishing after it’s “too late” that you’d given birth. In one case, you’ve not only messed up your own life but you’ve totally messed with that of someone who didn’t consent to said messing. In the latter case, well, it’s only you who has to live with the consequences of your regret. That seems more fair than the alternative.

This is all just the tip of the iceberg. Don’t even get me started on Patton’s ludicrous claims about feminism (e.g., women who choose marriage and motherhood should “be prepared for the indignation of feminists” – that’s news to this married feminist!). And her suggestion  that high school girls have plastic surgery before entering college so that they can be “as socially successful in college as possible” is just straight up cray cray.

In her recent appearance on TODAY, Savannah Guthrie rightly asks Patton if her sole purpose is to be provocative. While Patton patently (Patton-tly? I can’t get enough of that!) denies it, one can’t help but think about the fact that these ludicrous claims have certainly gotten her plenty of attention. And they got her a book deal. And they resulted in this blogger, who certainly has better things to do with her time, getting sucked in for the better portion of a day.  Well played, Patton, well played. I’ve been so distracted by all this nuttiness I completely forgot to have a kid.

Reviews of Childfree by Choice: The Movement Redefining Family and Creating a New Age of Independence are rolling in, and we’re pleased as punch to see that folks are enjoying the book! Freelance reviewer Terri Schlichenmeyer (AKA The Bookworm Sez) wrote a…
END_OF_DOCUMENT_TOKEN_TO_BE_REPLACED

This is our manifesto; what we’re {not} having a baby! is all about. We hope you like it! If you do, get your own copy here! Special thanks to [Expert Enough] for inspiring our manifesto. Imitation being the sincerest form…
END_OF_DOCUMENT_TOKEN_TO_BE_REPLACED

As a 40-something year old woman, I’ve been around for enough years to have enjoyed my share of friendships. Some were short-lived but intense, like the sort made at summer camp when you find your soulmate during orientation and then…
END_OF_DOCUMENT_TOKEN_TO_BE_REPLACED

by Emma Clarkson So, how was your 2017? Absolutely nuts, you say? Madder than a bag of spiders, you say? The worst time of your entire life … but hey, 2018 is gonna be your year – you can just…
END_OF_DOCUMENT_TOKEN_TO_BE_REPLACED