I just ordered a new pair of running shoes for the first time in about 4 years. Exciting news, right? Not really, but it did get me thinking about why its been so long. You see, when Amy and I moved to Maine from Minneapolis we were both pretty avid runners. I’ve run a couple of marathons and Amy has run four. We’ve both done a lot of other races ranging from 5k up to half marathons.

Putting aside the ridiculously cold winters, Minneapolis is a great city for runners. Spread across the whole city are numerous pedestrian trails. Right south of downtown there is a collection of lakes, surrounded and linked by trails that provides nearly infinite, convenient routes for runs from a couple of miles to double digit lengths. Water fountains are staggered along most of the trails along with the even more important bathrooms.

If you’ve ever run distance, you know what I mean when I talk about the importance of convenient bathrooms. Right?

So, Minneapolis was great for running. Prior to moving to Bangor, Maine we thought our new home would be even better. We thought there would be good places to run; we’d been told of some “great trails.” We assumed that being in a small city the traffic would be more manageable for pedestrians. We assumed small town people would be a little more friendly and gracious.

Turns out there are very few places in our city for a runner who wants to get out of traffic. The trails we were told about are short and populated with bath salts users. We do have one decent place to run, the City Forest, but that is actually quite a ways away from our home, outside of town. Not in the City. This doesn’t really work for me since we only have one car and Amy usually has it for work. That leaves running on city streets or sidewalks. I can’t tell you how many times I’ve almost been hit at intersections in this city by people who refuse to stop at stop signs; who drift through crosswalks. Pedestrians in this town are invisible.*

Pedestrians in this town are also not safe from dog owners. I’ve been nipped at and barked at and nearly tangled in four hundred foot long retractable leashes repeatedly while dog owners make placating sounds like “Don’t worry…he’s friendly!” This rather than just control their animals. Which brings us to, if not “the straw”, then one of the straws that broke the camel’s back, i.e. brought my running career to an end a few years back.

A Runner, a Family with Small Children, & a Rottweiler 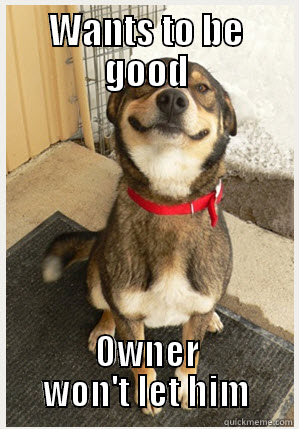 I was running down the sidewalk in our neighborhood. Up ahead I spotted a group walking toward me composed of a father about my age, a girl of 11 or 12, and a boy of about 8. The girl, who probably weighed 60 pounds soaking wet, was walking a Rottweiler. My guess is that the Rotti weighed 90 pounds soaking dry. As I approached them, the family stopped and spread out, with the father going left, the girl and Rotti going right, and the little boy standing dead center in the path.

This is when I started to get nervous. See, I have quite a bit of experience with dogs; my friends call me The Dog Whisperer despite my lack of Mexican heritage. I knew in this case that

I slowed from a run to a walk and carefully navigated between the dad and the little boy, putting as much distance between me and the dog as possible. That is when the dog lunged and snapped at me, nearly pulling the girl off her feet. I turned and stopped to face down the dog. The dog backed off and I turned to the father and said “You need to control your animal” and then walked/jogged away.

This is when things went off the rails.

Some People Shouldn’t Have Dogs… or Kids

In response to my comment, rather than apologize for my near mauling, the father lost it. He started walking after me yelling that I had no right to run on the sidewalk; that the sidewalks were for walking only.

I couldn’t believe it. I turned around and went back to him. I pointed out that there is almost no situation in which his dog biting me on a public sidewalk would be defensible. That his dog attacking me could lead to not only my injury, but the destruction of his dog. That his children might be impacted by seeing a violent altercation and by the resulting death of their loved pet. Further, that he should be careful about defining sidewalks as a “no running zone” since his children probably run on them daily.

This more or less shut him up. However, at this point I was done with my run that day. Over the next few weeks and months my running gradually came to a stop. The danger and annoyance factor just wasn’t worth it.

There it is. Wish me luck on my new return to running. If you don’t hear from me again google “man hit by car bit by dog”.

* This is true only if you are trying to follow the rules of the road as a pedestrian. If you are trying to jaywalk, drivers in this state will stop traffic anywhere to let pedestrians cross illegally! So, to recap, try to cross legally, get runover. Try to cross illegally, drivers will help you by stopping, getting out of their car, and carrying you across the road. They may even offer to buy you a beer.

Reviews of Childfree by Choice: The Movement Redefining Family and Creating a New Age of Independence are rolling in, and we’re pleased as punch to see that folks are enjoying the book! Freelance reviewer Terri Schlichenmeyer (AKA The Bookworm Sez) wrote a…
END_OF_DOCUMENT_TOKEN_TO_BE_REPLACED

This is our manifesto; what we’re {not} having a baby! is all about. We hope you like it! If you do, get your own copy here! Special thanks to [Expert Enough] for inspiring our manifesto. Imitation being the sincerest form…
END_OF_DOCUMENT_TOKEN_TO_BE_REPLACED

As a 40-something year old woman, I’ve been around for enough years to have enjoyed my share of friendships. Some were short-lived but intense, like the sort made at summer camp when you find your soulmate during orientation and then…
END_OF_DOCUMENT_TOKEN_TO_BE_REPLACED

by Emma Clarkson So, how was your 2017? Absolutely nuts, you say? Madder than a bag of spiders, you say? The worst time of your entire life … but hey, 2018 is gonna be your year – you can just…
END_OF_DOCUMENT_TOKEN_TO_BE_REPLACED