So, watch the following video, if you will…

<<VIDEO NO LONGER AVAILABLE. DEPICTED INTERVIEW WITH LAUREN SANDLER, AUTHOR OF “HAVING IT ALL WITHOUT HAVING KIDS” (TIME MAGAZINE 2013) AND A SCENE FROM SEX & THE CITY 2 DURING WHICH CARRIE SHARES SHE AND BIG ARE NOT PLANNING TO HAVE KIDS, TO WHICH SOMEONE REPLIES, “SO IT’S JUST GOING TO BE YOU TWO?”>>

Anywho, in this particular case the movie clip and specifically the phrase “Soooo…it’s going to be just you two?” perfectly captures the confusion of many people when told we’re {not} having a baby.

Really though, it never fails to amaze me that after ~50 years of access to reliable and easy to use birth control – talking about ‘The Pill’ here – people still have a hard time wrapping their heads around the notion of choice that this provides.

i’m {not} having a baby because… 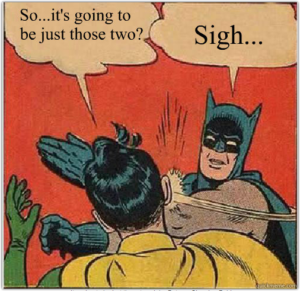 I actually want to talk about the interviewee’s (Lauren Sandler) comments/findings on why women are making this choice. Here are the main reasons she gives:

Well, there’s a lot of stuff there and I do think that these reasons apply to varying degrees. But let me take a slight aside here and wander back to my past…

But that’s not what I want to talk about.

When I was an undergrad majoring in biology, I took an animal behavior class. It was one of the most interesting, amazing, and frankly awe-inspiring classes I ever took. We spent a lot of time looking at various animals’ adaptations as they related to their behavior and one of the things we learned was to always look at these adaptations in two dimensions – the proximate cause and the ultimate cause.

What this means is why an animal does something (proximate) and also how it does it, usually physiologically (ultimate). One example that comes to mind is a certain type of moth, that when hit by sonar, immediately executes evasive maneuvers. And I mean immediately; before the brain of the moth is physically able to respond.

In this case the proximate cause is fairly obvious; it’s to avoid getting eaten. Sonar means bat and bat means predator. The ultimate cause however is not quite as obvious given that the response is faster than the brain can react.

What actually happens is that the moth has ganglia directly attached to the sensors that can detect bats’ ultrasonic calls. When a moth of this type detects ultrasound, the ganglia override the brain and send the moth into erratic and evasive flight. Very cool stuff.

About now you’re asking what this has to do with the video. Here goes:

The list of reasons above for not having children are all what I would call proximate. I’d argue that there’s something more fundamental and interesting going on here, and here it is:

Women realize they have the option to not have children

All the key pieces are now in place including effective and accessible birth control, woman having roles in society beyond ‘baby maker’ and ‘child-rearer’, and a society that is generally more accepting of non-traditional life choices.

This is the ultimate cause for why people are choosing to remain childfree. Only once you know you have an option can you start thinking in terms of the proximate reasons to not have kids of which there are hundreds.

At this point, if you’ve really been paying attention, you will have realized that I lied to you at the beginning of this post. I really did want to talk about the notion of choice. 🙂

P.S. Geek bonus for you bat/moth and or bio lovers

P.P.S. For the record – whoever’s keeping it -I have never watched Sex in the City, nor will I

Reviews of Childfree by Choice: The Movement Redefining Family and Creating a New Age of Independence are rolling in, and we’re pleased as punch to see that folks are enjoying the book! Freelance reviewer Terri Schlichenmeyer (AKA The Bookworm Sez) wrote a…
END_OF_DOCUMENT_TOKEN_TO_BE_REPLACED

This is our manifesto; what we’re {not} having a baby! is all about. We hope you like it! If you do, get your own copy here! Special thanks to [Expert Enough] for inspiring our manifesto. Imitation being the sincerest form…
END_OF_DOCUMENT_TOKEN_TO_BE_REPLACED

As a 40-something year old woman, I’ve been around for enough years to have enjoyed my share of friendships. Some were short-lived but intense, like the sort made at summer camp when you find your soulmate during orientation and then…
END_OF_DOCUMENT_TOKEN_TO_BE_REPLACED

by Emma Clarkson So, how was your 2017? Absolutely nuts, you say? Madder than a bag of spiders, you say? The worst time of your entire life … but hey, 2018 is gonna be your year – you can just…
END_OF_DOCUMENT_TOKEN_TO_BE_REPLACED