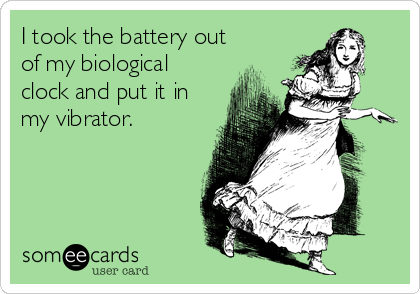 “I never wanted to have kids since as early as I can remember. I remember when I was twelve I read something about the likelihood of breast cancer being higher for women who don’t have kids. And I was just really annoyed and sad about it so I talked to my mom about it, like ‘Well what if I don’t want to have kids? This totally isn’t fair!’ My mom just laughed and said ‘You don’t need to worry about that now. You’re twelve. You’ll change your mind.’  I’m thirty-six. I still haven’t changed my mind but my mom is still waiting for my clock to kick in.” -Allison

Allison, one of the 45 childfree adults I’ve interviewed in the course of my sociological research on the childfree, is one of many childfree who have been told that they’ll change their minds about not wanting kids. The biological clock argument posits that women’s “maternal instincts” will one day get the best of their will and ultimately drive them to want children.

Childfree people are confronted with this cultural myth all the time. And when people once thought to be childfree do change their minds it doesn’t help. A recent reddit thread brought this to light. It seems Leah and Paul, a couple featured in Lauren Sandler’s 2013 article in TIME magazine on The Childfree Life, are expecting.

Before we get too riled up, we should consider two things: 1) What the TIME article that included Leah and Paul’s story, despite it’s title, was really about; and 2) What the scientific evidence tells us about whether women’s supposed “biological clocks” will one day take over their brains.

What the TIME Article Was Supposed to be About

In reality, the revelation that Leah and Paul are expecting isn’t terribly shocking. They were probably never childfree to begin with; they were childless. And before we go throwing them or anyone else under the bus, we should remember that Lauren Sandler didn’t pitch the TIME article as a piece about the childfree. She pitched it as a piece about the motherhood mandate.

In our interview with Lauren last year, she explained,

“I actually pitched, reported, and wrote the story as a look at what it means to not be a mother in a culture that continues to mandate motherhood for women. I was very surprised to see “The Childfree Life” on the cover. If I had written a story to go with the title, it would have been a very different one, which would have been much more about men, instead of narrowly focusing on the motherhood mandate after feminism.”

We don’t know Leah and Paul but we met them briefly on the set of the Katie show and found them to be perfectly decent people. They, like anyone, have every right to change their minds about what’s right for their lives. And, to our knowledge, they never claimed to represent all childfree people for all time.

Yes, given the fact that they were apparently actually childless, it’s unfortunate that they were cast as childfree. But they shouldn’t be demonized for this. They’re human. Whether they identified as childfree themselves or were labeled that way by others, they have no obligation to the childfree world to never procreate.

And while they, as individuals, should not be blamed, the series of events surrounding them is unfortunate for us, the childfree. We’ve got enough cultural pressure, backlash, and myths to confront. It doesn’t help when a very public, supposedly childfree couple changes their minds. But that doesn’t change science. And science suggests there’s nothing “magical” in our biology that drives women to change their minds about not wanting kids.

Ok, we admit it. We too have changed our minds in the past. I used to insist that chocolate peanut butter Haagen-Dazs was the only decent frozen dessert on the planet. Then I tried salted caramel gelato. OMG. Mind changed! Lance and I both used to think we’d never adapt to small town life in Maine but now we can’t imagine living in the big city ever again. Mind changed!

No one ever turns to the happily expectant couple and says, “Oh don’t worry about that bump there, honey. You’ll change your mind once it’s out!” It’s only the childfree who are expected to change their minds.

This comes from the firmly implanted belief that we humans have a “natural” drive to want kids. It’s instinct. We can’t control it. We simply must have them. Surely any woman who claims not to want kids will change her mind once her “biological clock” kicks in. These are tired arguments the childfree hear all the time.

The fact that the “biological clock” gets conjured up with such regularity makes sense. Many people do feel compelled, for reasons that they can’t always articulate, to have children. It’s easy to think that if we can’t easily point to a cause for feeling compelled to have children, perhaps the cause is instinct. But believing something to be true doesn’t make it so.

Findings from scientific research are not on the side of those who believe in the “biological clock” as baby making instigator. Sure, there’s a clock in the sense that there comes a time when a woman is no longer able to conceive. But the mystical force driving some women to want to parent is social, not genetic.

The socialization we receive from the time we’re born tells us that being a parent is one of the most important – and expected! – things we can become when we grow up. That’s what drives us to want kids (here’s one example of how this works). The ideology of pronatalism is the powerful force at work here.

While scientists may have discovered a “nurturing instinct” that kicks in for females after they give birth (at least in female mice), there is little evidence that humans have an instinctual drive to actually have kids. And before you go telling me that our urge to have sex is innate, think about whether there’s a difference between having sex and rearing children. Any parent can attest that these are quite different activities. A drive to do one does not equal a drive to do the other.

The key point is this: The fact two people featured in TIME’s childfree article have chosen to become parents has nothing at all to do with the fact that the biological clock argument is a myth. Sure, sometimes people change their minds. Also, sometimes people who are childless get miscategorized (or miscategorize themselves) as childfree. The biological clock plays no role in either of these processes. Largely because it doesn’t exist, at least in the sense that it drives us to lose our abilities to make conscious decisions for ourselves.

The idea that women are biologically driven to want to rear children is a made-up notion that supports an old timey pronatalist ideology designed to keep women “in their place.” Let’s worry a little less about the few people who change their minds about wanting kids and more about the fact that those who don’t want kids – and who don’t change their minds – are vilified for their choice. Now that’s a problem worth fighting over.

Reviews of Childfree by Choice: The Movement Redefining Family and Creating a New Age of Independence are rolling in, and we’re pleased as punch to see that folks are enjoying the book! Freelance reviewer Terri Schlichenmeyer (AKA The Bookworm Sez) wrote a…
END_OF_DOCUMENT_TOKEN_TO_BE_REPLACED

This is our manifesto; what we’re {not} having a baby! is all about. We hope you like it! If you do, get your own copy here! Special thanks to [Expert Enough] for inspiring our manifesto. Imitation being the sincerest form…
END_OF_DOCUMENT_TOKEN_TO_BE_REPLACED

As a 40-something year old woman, I’ve been around for enough years to have enjoyed my share of friendships. Some were short-lived but intense, like the sort made at summer camp when you find your soulmate during orientation and then…
END_OF_DOCUMENT_TOKEN_TO_BE_REPLACED

by Emma Clarkson So, how was your 2017? Absolutely nuts, you say? Madder than a bag of spiders, you say? The worst time of your entire life … but hey, 2018 is gonna be your year – you can just…
END_OF_DOCUMENT_TOKEN_TO_BE_REPLACED