This Childfree Story is brought to us courtesy of Elizabeth Barton and is a re-post from her blog The Lizard Chronicles. Why “The Lizard Chronicles” you ask? Maybe she gets lethargic in cool weather…or it could have something to do with her name. We’ll never know. Either way, enjoy!

This Childfree Story is brought to us courtesy of Elizabeth Barton and is a re-post from her blog The Lizard Chronicles. Why “The Lizard Chronicles” you ask? Maybe she gets lethargic in cool weather…or it could have something to do with her name. We’ll never know. Either way, enjoy! 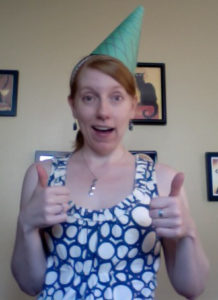 Not long ago, I visited my doctor for a routine checkup. I was seeing this particular doctor for the first time (the one I had been seeing previously had left the practice). As we discussed my health and history, the conversation turned to contraception. “You have not had children, correct?” she said, glancing down at my file.

“Is having kids something you want to do in the future?” she asked.

I couldn’t help but brace myself before I even answered. I had heard all the retorts so many times. Really? Why not? Oh, you’ll change your mind. But you’d make such a good mom! I’ve come to expect some sort of argument or downright dismissal of my lack of desire for offspring. To be fair, I have always been open to the idea that I might reconsider and want kids some day. After all, you can only be told that you’ll change your mind so many times before you start to think that you will, or at least concede that it’s within the realm of possibility. Never say never, but probably not has been my stance on my own procreation for some time now.

But back to the doctor’s office…

“No,” I said, steeling myself for the barrage that was sure to follow.

“Okay, that’s cool,” my doctor said. “I only ask because if kids were something you definitely wanted in the future, I would advise you to think about trying sooner rather than later. But that’s not an issue if you don’t want children. So, no worries.”

It’s difficult to describe what I felt in that moment. Gratitude, for one thing. I was thankful my new doctor was so cool about this. There was no pressure. She just wanted to know where my head was and be sure I was medically informed. Then I was annoyed that I was grateful. I had become so accustomed to people challenging me on what I think is one of the most important and personal decisions a person can make that I was practically jubilant when my statement went uncontested. There wasn’t even a tone in my doctor’s voice that suggested incredulity, no gestures to imply that, although this was my decision, I would surely regret it. I was irritated at how surprised I was that she would simply accept my answer so matter-of-factly and move on. On one hand, I was happy. I liked this new doctor, but I was annoyed that this attitude of hers should necessarily be so refreshing.

There was something else in the mélange of emotions I was feeling, something unexpected and hard to explain. Was it sadness? Disappointment? No, neither of those adequately describe the feeling, although they were somewhere in the vicinity. It was that bittersweet sensation we humans sometimes get when we make choices. Even if we are confident the choices we are making are the best ones for us, there is no denying the fact that opening one door usually means that another stays shut. In a way, we mourn the loss of the option. It’s not regret. It’s simply acknowledgment of fleeting thoughts about what might have been if we had chosen differently.

I’ve heard parents express similar feelings shortly after having a child. It’s not that they don’t love their child or that they would choose a different path if they somehow could. There’s just a moment of pause when it all hits—there is no going back. The option of not being a parent is officially off the table.

For those of us who choose to be childfree, usually, there is not one single, well-defined moment when the option of having a child is taken away. Instead, it fades gradually, such that, most of the time we don’t even notice unless something calls our attention to it. It’s not an option we’re interested in exercising, so we don’t pay much mind when it becomes more and more of a remote possibility.

Perhaps all of this is really my apprehension about getting older rearing its head as I edge closer to forty. That’s probably part of it, but there’s more to it than that. The fact is that there will be no resounding gavel bang to mark the end of my potential childbearing years, but the conversation at the doctor’s office that day was a warning shot of sorts. Suddenly, my attention was drawn to the fact that my choice would not be a choice forever, and suddenly, it felt more real.

Don’t get me wrong, I did not abruptly change my mind and want to have a baby. I’m still confident that motherhood is not for me. In fact, for a moment, I almost felt as if I shouldn’t allow myself to acknowledge this strange emotion I was feeling, as if permitting any room for such thoughts would give way too much satisfaction to all those who told me I would one day regret my decision to be childfree. Ultimately, though, that’s wrong. I can grieve the loss of a choice. I can mourn the fact that I cannot have things both ways. Opting for one road means leaving the other unexplored. Both paths may have their own beauty, and likely, their own pitfalls, but I can only choose one.

Reviews of Childfree by Choice: The Movement Redefining Family and Creating a New Age of Independence are rolling in, and we’re pleased as punch to see that folks are enjoying the book! Freelance reviewer Terri Schlichenmeyer (AKA The Bookworm Sez) wrote a…
END_OF_DOCUMENT_TOKEN_TO_BE_REPLACED

This is our manifesto; what we’re {not} having a baby! is all about. We hope you like it! If you do, get your own copy here! Special thanks to [Expert Enough] for inspiring our manifesto. Imitation being the sincerest form…
END_OF_DOCUMENT_TOKEN_TO_BE_REPLACED

As a 40-something year old woman, I’ve been around for enough years to have enjoyed my share of friendships. Some were short-lived but intense, like the sort made at summer camp when you find your soulmate during orientation and then…
END_OF_DOCUMENT_TOKEN_TO_BE_REPLACED

by Emma Clarkson So, how was your 2017? Absolutely nuts, you say? Madder than a bag of spiders, you say? The worst time of your entire life … but hey, 2018 is gonna be your year – you can just…
END_OF_DOCUMENT_TOKEN_TO_BE_REPLACED